What result can SMER-SD show after a year in power?

10957
50%
50%
Source
flickr
Early elections of March 2012 were marked by the unprecedented victory of SMER-SD, which formed the first single party government of the post-communist era of Slovakia. Which direction has the country taken under the aegis of Prime Minister Robert Fico?

The government's success is not questionable anymore

Author
Kristina Londakova
Translator
Kummer Livia
06/12/2013 - 09:02
"After a year in power Mr Fico is in a perfect position". That sentence reflects the present situation; SMER-SD (Social Democratic Party) still has 40% support of the voters. If judged from the perspective of the global results the country has achieved, those calling the government incompetent or populist are disproved

First, the SMER-SD government has finally put an end to the endless political disputes which have almost paralysed the Radičová government, and have lead to its fall. In this way, because of the popular legitimacy, the Social Democratic Party has a sufficiently strong mandate to impose reforms in the Parliament, even difficult ones. Without having to compromise with a coalition party, Prime Minister Robert Fico can concentrate all his efforts on the management of the country in a difficult situation. It is because of this stability and determination that the new government suceeded at adopting unpopular but necessary reforms for the health of pubic finances; raising taxes, strictly cutting public expenses etc.

Furthermore, unlike its opposition's attitude, the majority of socialists are unilaterally pro-European, urging a more important integration of Member States, especially of those within the euro-zone. In this way, regarding the obligation Slovakia has towards its European partners, the presence of the Fico government is all the more beneficial for the country, protecting it from the isolation it was gravitating towards because of the eurosceptics within the Radičová government.

Results which speak for themselves

If it came to publishing a "grade report" of the socialist government, the first area of evaluation would be that of the economic situation of the country in the context of the crisis and the Europe-wide quasi-deflation. Despite all that, Slovakia is in full growth. In fact, the Slovak economy shows better results than before the crisis of 2007 - which was nevertheless an unprecedented success period in the history of the country earning it the nickname of "the Central European Tiger".

Actually, today Slovakia is the second most performant economy within the European Union after Poland with a growth of 10,5% compared to 2007, while the European average growth is only around 0,8%. Also, according to the estimates of the European Commission, Slovakia should attain the third largest growth of GDP among the Member States. Paralelly, Slovakia is the third country with the most important cuts in public spending. In fact, the government in place is determined to keep to this policy of consolidation of spendings, with the so-called "ESO", the reduction and reorganisation of ministries in order to minimize excessive costs. In this way, the objectif of maintaining the deficit below 3% should be attained for 2013. However, structural changes are yet to come such as pension reform and reorganisation of the health sector.

However, attempts to improve the situation of countries are many and cannot be reduced only to easily quantifiable economic results. Indeed, in the field of culture and transport, there is an effort to better draw on the European structural funds. In the same way finally a substantial reform of education - in order to reduce the number of universities and improve their quality - has now begun.

Even though high unemployment continues to haunt Slovakia, just like other countries throughout Europe, the arrival of new investors is good news just like the success of keeping those already established in the region, which remains a key factor in the struggle of maintaining and increasing employment.

"Is there no alternative?" or the erased opposition

However, the essential question, a year after the landslide victory of SMER-SD, is this: is there a viable alternative for Slovakia? On this all observers, irrespectif of their political persuasion, agree: there simply isn't. The real "putrefaction" of the Slovak right continues and has reached proportions that not even sceptics have foreseen.

Despite the artificial attempt to unite under the egis of the "Popular Platform", the right-wing remains deeply divided and unpopular ... with polls sending even SDKU, the largest right-wing party of the past, to the political cemetery. Fragmentation continues, with the departure of deputees and the appearance of new mini-parties - eg. the New Majority of Lipšic. Leadership and an alternative vision are still severely lacking for the right-wing .

In addition, the opposition has clearly lost the strongest anti-fico argument - corruption. Since the re-election of Mr. Fico there were no corruption scandals at the highest places. One thing that we could not say about the right-wing government of Radičová. At the time, despite "transparency" being the flagship of the Radičová government, scandals followed in a macabre dance, culminating in the famous Gorilla affair.

Mr Ján Figel' of the Chirstian Democratic Movement may very well proclaim that SMER-SD should "be limited to monitoring the light and heating." However, these strong words only reflect the derision of the right-wing, without any prospect of returning to power - not even on the long-run. Especially following rumors that Mr Fico plans to run in the presidential elections next year for which - what a surprise - the right-wimg has no common candidate yet .

A year later: only an apparent success

Author
Alica Hulakova
Translator
Kummer Livia
06/12/2013 - 09:03
Twelve months have elapsed since the landslide victory of the Socalist Democratic Party, SMER-SD at the legislative elections, it is time to take stock. Surely, the party is still scoring high in the polls, yet its popularity is already declining.

Despite the fact that prosecution was blocked for several weeks because of the complaints raised in the Centes Case, Prime Minister Robert Fico said its is out of question that the new bill to unlock prosection would be negotiated differently than through due process. The paralysis is the direct result of the refusal to nominate Jozef Centes, properly elected by the National Council of the Slovak Republic, to the position of Attorney General, by the President.

A week after, suddenly, Robert Fico changed his mind. He addressed the problem with urgency incomparable to the previous laxity and urged voting so much that the bill was discussed and voted in barely nine hours. The vote was marked by a number of attempts of the opposition to prevent the passing of the law or at least to amend it, all ending in failure. In the end the opposition left the room and it was mostly members of SMER-SD who were left to vote the law. Thus, the comparison made by some Slovak politicians between Prime Minister of Slovakia, Robert Fico and Prime Minister of Hungary, Viktor Orban, does not seem to be too unrealistic anymore.

At the time when the countries of the European Union introduced austerity measures, Robert Fico's government in Slovakia took a different path. Instead of reducing government spending, Robert Fico stood for the maintenance or even rise of social spendings to better protect the most vulnerable. Although his main argument is not to stifle the growth with austerity measures he does not hesitate to strangle businesses by increasing their taxes. The transition from 19% to 23% taxing weighs not only on entrepreneurship but also affects the attractiveness of Slovakia for investors. The forementioned measure places Slovakia behind eleven other EU countries and behind all four Visegrad countries.

The effectiveness of such a decision is even more disproportionate since the country is still unable to defeat corruption inherited from the Soviet era. Therefore, the effective allocation of resources collected through taxes is highly questionable. 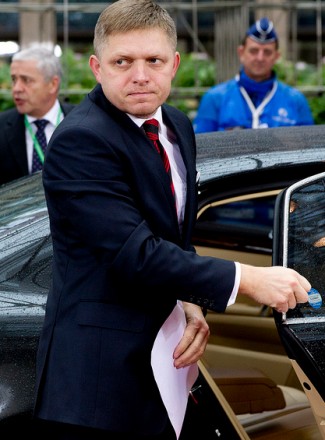 Even leaving aside the deterioration of Slovakia by two places in terms of competitivity, the multiplication of cases suspected of corruption cannot be neglected. If the Slovak Prime Minister said that his government has no scandals, the cases of the sales of emissions or certain overpriced purchases weigh heavily on the account of his government. Furthermore, what is flattering about the fact that unemployment has reached its highest level of the past eight years, the competitiveness of Slovakia deteriorated and the country remains at the lowest ranks regarding the independence of the political power and the judiciary? If enthusiasm was high, it may not be wrong to think that the disappointment that follows will be even more painful.