Trump's speech in Warsaw, as the Poles understood it

3960
48%
52%
Source
Ministry of Foreign Affairs of Poland, Flickr
US President Donald Trumps's visit and speech in the Polish capital, Warsaw, was labelled of 'historic significance' both by his own administration and by Polish politicians. But how did his speech resonate with the Polish people?

Author
Przemysław Antas
07/19/2017 - 19:00
In his Warsaw speech Donald Trump played on Polish animosities against the Germans hoping to find an ally in his economic war against Germany. However, if Poland entered this battle its economy would have more to lose than to gain.

In his Warsaw speech, amongst other things, President Trump underlined the threat of government bureaucracy “that drains the vitality and wealth of the people”. Most Poles took it as an attack against Germany and its economy that radiates in the whole European Union. This was probably Trump’s intention.

Donald Trump has his reasons to attack Germany. They do not contribute enough to the world’s security infrastructure, mostly financed by the USA, so they can move more money to promote exports and aid their businesses. And now the German trade surplus is a menace to the US economy. It is no surprise that Donald Trump seeks allies in his subtle economic war against the German state. In Warsaw, he decided to play on Polish animosities against the Germans.

The steady creep of government bureaucracy

Poles historically do not like bureaucracy. To many of them it is somehow still associated with the Prussian and Tsarist administrations or the communist nomenklatura. Trump knew how to strike the right chord. Indeed, Poland like all EU countries, suffers overregulation and bureaucracy. Most Poles are very pro-European but they do not want to have a European “superstate” headed by German and French bureaucrats. They want a Europe of homelands in which every country can independently decide about its own policy while still cooperating on a European level. And they want Poland's economy to be something more than a subcontractor of the German industry. 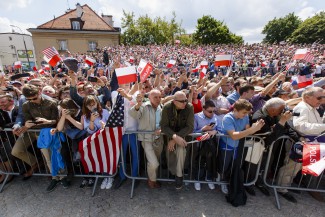 So many young patriotic Poles who were listening to that speech were happy to hear those words. Donald Trump knows well how to play on emotions.

What does Poland have to gain?

But let’s set aside emotions for a moment and think. Is it good for the Polish economy to wage a war against a German trade surplus with the USA? Germany is a major business partner of Poland. More than 27% of Polish exports go to Germany (almost 80% of Polish exports go to the EU). Germany buys car parts from Poland, electrical appliances, furniture, food, beverages and many other goods. Like it or not, but a big part of Polish business thrives because of growing German exports to the U.S. and China. In many cases goods produced in Poland are just labelled in Germany before being forwarded to other non-EU countries. The value of direct investments of German companies in Poland in 2015 was 27.4 billion euros, whereas American investments were only 4.9 billion euros. Polish firms are also investing more and more into Germany and other EU countries. The single European market is much more accessible to them than the American one. Just to illustrate this, Polish entrepreneurs still need to apply for a visa before going to the United States on a business trip.

Given these circumstances, is it really beneficial for Poland to be dragged into a trade war with its most important business partner, by the U.S.? Is Poland really a good ally for Donald Trump in his attempt to limit the power of the German economy?

Poles are romantics and many Polish politicians used to be reckless idealists. However, Donald Trump ignored the fact that the new wave of Polish businesses and political elites represent much more pragmatic and down-to-earth thinking. Even though his speech in Warsaw was marvellous and even historic, in the long-term perspective, Donald Trump needs to put his money where his mouth is to win Poland’s actual support. This will require providing Poland with an attractive economic alternative to its business ties with the German and EU economy.

Unfortunately, in his Warsaw speech he did not present anything new for negotiation. Except for maybe patting the Poles on the back.

Source of the photo: Flick, Ministry of Foreing Affairs of Poland

President Trump’s speech and Poland's future Role in the West

Author
Nicholas Siekierski
07/19/2017 - 19:00
Poland has been a bastion of Western civilization throughout history. In choosing its capital, Warsaw, as the site of his recent speech, President Donald Trump presented Poland as the embodiment of the values and faith necessary for the West to overcome the monumental challenges that it faces.

In many ways, Poland was the ideal location for Donald Trump’s speech on the 6th of July. Even though the countries of Western Europe are economically and militarily stronger, they are spiritually weaker. The President of the United States underlined correctly that "Poland is the geographic heart of Europe, but more importantly, in the Polish people, we see the soul of Europe." A soul which was tempered in the fires of the 20th century, but never extinguished.

The identity crisis of the West

President Donald Trump was not merely visiting an ally, he was in Poland "to hold it up as an example for others who seek freedom and who wish to summon the courage and the will to defend our civilization." Many say that other countries of the West have lost that courage. By denying the inherent goodness of Christian values, they reject the very foundations of their societies. This self-loathing behavior leads necessarily to the crisis of their own identities, and the spiritual vacuum they suffer from cannot be filled only with the pursuit of abstract principles like equality, diversity and sustainability.

Unlike the present state of some Western nations, "the story of Poland is the story of a people who have never lost hope, who have never been broken, and who have never, ever forgotten who they are." Ironically, the adversity that Poland has faced during repeated attempts to wipe the nation from the map and erase its people's identity under Nazism and Communism, steeled the resolve of Poles to preserve their culture. At the same time, generations of economic prosperity, political freedom, and liberal progressivism have led to the opposite in the West.

When the Polish show the way

Poles are well aware of their relative material poverty compared to much of Europe and America, but there is more to protecting your culture and way of life than expensive weapons and a sizable GDP, "because as the Polish experience reminds us, the defense of the West ultimately rests not only on means but also on the will of its people to prevail..." That will to triumph at all costs is the critical ingredient in reversing the decline that threatens the very existence of Western civilization. Despite many defeats and setbacks, Poland has proved that even seemingly impossible odds can be overcome when fortitude is coupled with hope. 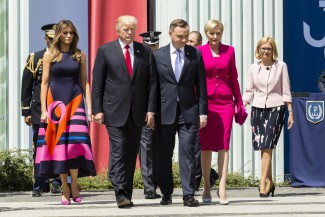 According to President Trump "the fundamental question of our time is whether the West has the will to survive. Do we have the confidence in our values to defend them at any cost?" Using the example of the barricade on Jerusalem Avenue during the Warsaw Uprising, which served as a lifeline for the city, the President demonstrated that even the most humble pathway can be of the greatest significance. That besieged corridor is an analogy for the West itself, which is under assault not only from external enemies, but from an internal crisis of confidence in the rightness of its very existence.

Poles will interpret President Trump's speech in various ways, but if there was one thing that he wanted to leave them with, it was a sense of belonging, purpose and the role they have to play, that they may have yet to realize. "A strong Poland is a blessing to the nations of Europe, and they know that. A strong Europe is a blessing to the West and to the world." It's in continuing to recognize that strength, that Poland will take its rightful place as an exemplar of the values necessary to make the West great again.

The author is expert on American Politics at Freedom Institute

Source of the photo: Flickr, Ministry of Foreign Affairs of Poland