Has the Hungarian healthcare system gotten any better?

3512
46%
54%
Source
Flickr.com
Healthcare is an evergreen topic of Hungarian politics. How have hospital conditions and circumstances for doctors and patients changed under the Orbán-government? The following pro and con arguments guarantee to give you the whole picture of the situation.

Author
Baksay Boglárka
Translator
Böröcz Dorottya
02/21/2018 - 16:10
Does the Hungarian government put enough emphasis on healthcare? According to the facts, statistics and the general public perception not at all. The phenomenon is not just a problem of the current government. The quality of the healthcare treatments has been deteriorating for a long time. Which are the crucial factors for changing the situation?

The Hungarian healthcare system” – an expression that has been uttered with disdain, sadness, bitterness or anger so many times. It has reached the point when achieving a significant improvement would require a huge investment, although this could be the most important factor in raising the population’s quality of life. The budget allocated or the attention paid to this area in governmental policy does not seem to be sufficient, neither from the patients’, nor from the healthcare workers’ point of view. When it comes to developments, it seems to be some sort of a forgotten sector, which leaves its mark on the whole healthcare system. Among the countless existing problems the system has to tackle, there are three outstanding ones: financial troubles, human resources issues and difficulties arising due to its tax-based structure.

The situation is getting worse

The result of the „European Health Consumer Index” survey shows how serious the situation is: among the 35 countries in the 2013 rankings Hungary was in the 28th place, which is not good at all. This position reflects multiple problems: weak patient rights, insufficient provision of information to patients, and deteriorating health results which show how overworked and underpaid healthcare workers are. The survey indicates that Hungary, as a state financing its healthcare from taxes, should put greater emphasis on convergence. Systems of this type are by nature lagging behind countries that provide healthcare services based on insurance, such as better performing Netherlands and France. Catching up with them with a tax-based system is only possible with huge efforts and ample financial investments, like the ones Iceland and Denmark have made. The question is whether Hungary will be able to support healthcare institutions, workers and the system overall with such financial expenditures in the near future.

The current financial situation is unsustainable in the long run. The financial crisis is alarming: the institutions are trying to meet their needs mostly by selling cheap, low-quality products and thereby drastically impairing the quality of treatments. The main reasons standing behind the phenomenon: indebted institutions, unclear relationships with the vendors (also due to financial reasons), furthermore the revenues from government subsidies and investments are infuriatingly low compared to the needs and demands of the treatments.

Besides the lack of financial resources, we have to mention the human resources crisis as one of the most important elements in the set of problems. The emigration of health care workers poses a great threat. The main cause of the emigration is that no matter how much they work, in addition to low wages in exchange for the unmanageable working hours, they have to live and work in existential uncertainty. According to the data of the National Healthcare Service Centre, just in the first 6 months of 2015 more than 900 healthcare workers left the country to try their luck abroad. Most of them headed to Germany and England. It is embittering that the average age of healthcare workers are nearing the retirement age. Numerous general practitioner position vacancies have been unfilled for years. Due to the abovementioned reasons, the new generation rather chooses to work abroad where the salary is commensurate with the amount of work done. It is still more and more common to see pensioners working. They often feel professionally obliged to go on because if they retire it is very difficult to find someone who would replace them.

What can we expect from the Hungarian healthcare? According to the information of the Origo news portal, Zoltán Balog, the Minister of Human Capacities (Human Resources), said that the multistage wage increases in the sector which began in 2016 will continue. The Minister also said that following the 12% salary increase in last November, an additional 8% increase can be expected this autumn and in 2019. The government started to realize that establishing a new system of hospital financing is unavoidable. Although it will not be an easy task as the state budget already has to be modified because of the wage increases alone. However, the real question, whether the policy outlined above could bring about real and lasting changes in the unstable system, remains open.

The Hungarian healthcare system is on the right track

Author
KR M
Translator
Böröcz Dorottya
02/21/2018 - 16:10
The Orbán-government has made significant changes in the healthcare system since 2010. Despite the irresponsible panic-inducing activity of the opposing parties, both domestic and international metrics show that the Hungarian healthcare system has begun to improve.

The healthcare system comprises of approximately 100 000 workers and 100 hospitals. That is why it is extremely hard to get results in the short run, which makes it a dangerous area for politics. Within the limited framework of this short article, I am trying to prove - backed by facts and numbers - that the right-wing coalition governing since 2010 has been brave enough to make significant changes. It could break negative tendencies in many instances that no Hungarian government had been able to do before.

Heavy legacy of the left-wing

From my point of view it is essential to mention the heavy legacy the Fidesz-KDNP inherited from the left-wing governments in 2010. The system at that point was prepared for privatization, and has drained, waiting for someone to throw it a lifebelt. Unlike the statements parroted by the opposition, the statistics of OECD clearly justify that it was not the Fidesz-KDNP government that has cut back the funding for healthcare. In the period between 2003 and 2009 the healthcare expenditures per capita were reduced on average by 0,4% each year, while between 2009 and 2016 they were increasing on average by 2,7% each year. Consequently, the cuts of funds ceased and an obvious growth can be observed now. 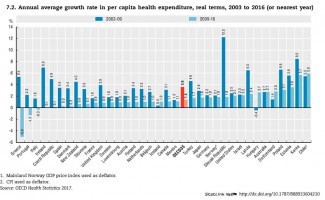 In my view, the biggest hospital development- and wage raising programs since the regime change can be considered the two most important actions of the Fidesz-KDNP government. During the past few years, investments of more than 500 billion HUF (1,6 billion EUR) were released for developments in the countryside. Patients can thus receive treatment in an increasing number of hospitals of a truly European quality. Besides the infrastructural investments, medical instruments were procured in a value exceeding 100 billion HUF (320 million EUR), so, correct circumstances of treatment are available in the countryside.

In order to develop the central region, the „Healthy Budapest Program” has been initiated, which will foreseeably exceed the countryside developments in volume. Between 2017 and 2026 it is planned to allocate approximately 700 billion HUF (2,2 billion EUR) of funds for this purpose. Three hospital centres are going to be established One of them is, moreover, a completely new greenfield investment. Additionally, 25 hospitals and numerous clinics are planned to be modernized. As for now, modernization of 16 clinics for 42,5 billion HUF (136 million EUR) has been approved so far.

As the result of the developments, salary increases, and scholarship programmes, the number of emigrating doctors is dropping, and on the contrary the amount of students getting medical degrees in Hungary is currently increasing. To be concrete, over the last six years, it increased by 40%. While in 2010 only one thousand people got their qualification, in 2016 it was 1399 people. In comparison with the last year of the socialist government, 50% fewer Hungarian doctors wanted to work abroad in 2017. According to OECD data, there are 14,5 qualified doctors per 100 population in Hungary, while the European average is 12,3.

The question might arise, whether the number of EU and national funds will bring results measurable and perceivable by the patients. The waiting lists introduced by Fidesz-KDNP in 2012 are the best indicators, and they are showing that the direction is right. Under the left-wing governments, there were no waiting lists as they didn’t feel it was important to make the data about waiting periods for treatments transparent and measurable. That period was the Paradise of parasolvency : those, who were well-off could jump the queues to their own liking and get the treatment before average citizens. The number of patients on the already transparent and available lists has decreased from 70 000 (2012) by 60% in September 2017. Nowadays, the amount of waiting patients for the 185 000 surgeries on the waiting lists does not reach 28 000.

There are many alarmists warning about deteriorating hospitals, fleeing doctors and nurses. They complain that the government does not spend enough on healthcare and does not care for it at all. How is it possible then that instead of 290 days that people had to wait for a cataract surgery in 2013, today´s waiting time is only 94 days?

The opposition is irresponsibly creating panic

The opposition and their affiliated press show an extremely distorted picture of Hungarian hospitals. Since they do not have to take any responsibility they are free to cause panic, generalize individual cases and create tabloid content from personal tragedies. Their reaction time is really short, and by the time it turns out that a given affair was just fake news they pull three more cases out of the hat. Due to their unprofessional and often disrespectful style, the experts try to avoid getting into a quarrel with them. An apt example of the opposition’s attitude towards healthcare was the election turmoil in 2014 when they did not manage to put any representatives with a medical degree into the Parliament. In contrast, as far as the currently governing parties are concerned, they have put 4 doctors to the Parliament’s hemicycle.

That the Hungarian healthcare system is patchy is not a subject for discussion. However, it is undeniable that with the funds expanding since 2010 and the long-term developing concepts, fixing of the healthcare is underway. In contrast, currently none of the opposition parties has a professional and reasonable programme that would contain any sensible proposals regarding the improvement of the state of Hungarian healthcare system, apart from asking for „more money”.