The wave of refugees - inside the fences and beyond

1657
49%
51%
Source
Pixabay.com
Some see the wave of refugees and migration as an opportunity, others think it poses a danger for Hungary and Europe. What are the core problems and how can they be solved? Let's see the arguments.

Author
Végh Pál Péter
Translator
Böröcz Dorottya
05/06/2018 - 00:00
The Hungarian government decided to close the Hungarian-Serbian, and then the Hungarian-Croatian border section with a physical barrier in response to the massive wave of illegal migrants that started in 2015. A few years later it proved to be a necessary and effective solution. Hungary defended its borders.

A migratory pressure began to intensify on Europe at the end of 2014 and reached its peak in the summer of 2015. In the second half of the summer, the number of incoming migrants increased dramatically in Hungary. On June 17, 2015, the Hungarian government decided to seal off its frontier on the Hungarian-Serbian border section so that immigrants would only use legal points of entry.

The first line of the fence was completed on August 29 on the Hungarian-Serbian border. Subsequently –as the migration routes changed and the refugees started heading towards the Croatian border – the fence was completed on the Hungarian-Croatian border on the 16th of October. Thus, the border barrier became complete in the south. As a result, the number of illegal border crossings diminished: while it was 98,756 in October, there were only 321 illegal entrants in November after the fence was finished. The decline has been rapid since then.
In the summer of 2016, Prime Minister Viktor Orbán announced that a second fence became necessary. Firstly, because the existing fence line was not an impenetrable barrier for those who tried to get into the country (it could be cut with wire cutters); secondly, he warned about the fact that up to hundreds of thousands of migrants could arrive in the future. The fence could not have stopped such masses as it was built back then.
The second line of the fence was completed by May 2017. The new border barrier is a fence system with night vision equipment, thermal cameras, video cameras, camcorders and an intelligent signaling system.
It is important to mention that in parallel with the construction of fences, the legislation on border protection was also amended. The authority of the border guards was increased and damaging the fence was declared a criminal offense. The transformation of the legal environment also contributed to the effectiveness of the border closure. Consequently, the southern border of Hungary became practically impenetrable. The illegal migration into our country was reduced significantly.

Everyone agrees: the fence is a must

During the construction of the fence, the Hungarian opposition parties – except for Jobbik-, criticized the border closure for environmental and humanitarian reasons. Over the past three years, the fence has effectively stopped the crowd flowing into Hungary. Even the opposition parties - overcoming their political disputes - do not deny this fact.
According to a recent survey by the Nézőpont Intézet, 82% of Hungarians agree with the closure of the southern border. There is a relative consensus regarding the necessity of the fence among members of the Hungarian society and the political elite as well.
Initially, the European Union strongly criticized Hungary because of the fence construction, even though the protection of borders and the choice of border surveillance are the exclusive competences of the member states. The Hungarian government has chosen a legitimate way to protect its borders. According to the survey of the Nézőpont Intézet, the majority of the Visegrád 4 partner countries’ population also supports protecting the borders with a fence: 60% of the Polish and Slovakian people and 55% in the Czech Republic welcomed the Hungarian fence.
The fence constructed in two phases on the southern border of Hungary has undoubtedly been an effective solution to stop the influx of refugees. 20 times more illegal border crossings were registered during the migration crisis in 2015, than in 2016 after the construction of the fence (see diagram). A fence is a successful alternative to protect the borders across Europe. A high proportion of people in Hungary and in many European countries support closing the border with a fence. Besides Hungary, Turkey, Estonia, Latvia, Bulgaria, and Greece have also successfully defended their borders with a similar method. 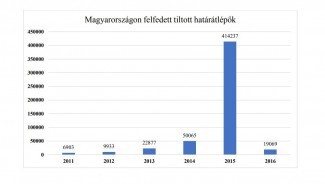 Could the wave of refugees mean the way out for Europe?

Author
Hegedüs Viktor
Translator
Böröcz Dorottya
05/06/2018 - 00:00
Aging society, demographic winter, crisis. A demographic scenario not yet experienced in human history, but often talked about. What impact can the recent wave of refugees have on European society?

An “aging Europe” is not a new concept. The formula is simple but carries serious consequences. Due to the increasing standard of living, the number of deaths is low, but so is the birth rate. Thus, the average age is increasing, but the population is decreasing. The birth rate is shrinking, and the proportion of workers to the dependents (those who are not working yet and those who are no longer working, combined) is really low. These demographic trends aren’t acceptable by any means.
The unfolding of the refugee crisis has intensified the debates within the European Union. The irreconcilable differences on migration among the member states resulted in constant disputes. The proliferation of the Islamic State proclaimed in the Middle East and, above all, the conflicts in the region – such as the Syrian civil war – forced a large number of humans to leave their homes and ring the bell at Europe’s Balkan entrance. We can witness a battle between divided politicians and the even more factious public opinion, both in public life and in the whole Union. If the EU member states were to relax their individual political interests, the wave of immigrants might even pull Europe out of the infertility pit.

On a political level

For the time being, the final and elaborate solution for the management of refugees on a political level does not seem to be near. The short-term symptomatic therapy which is now dominating the Balkans cannot be sustained over the long term. The Hungarian fence construction was soon criticized by the international press, but the surrounding countries quickly adopted the practice with various explanations. Germany continues to maintain its inclusive policy to welcome everyone who comes from a war zone. Turkey is trying to make full use of its bargaining position to get the most out of the EU. It will probably reach its goals , because if the EU does not comply, Turkey will not stop the flow of people.

From a financial viewpoint

If Europe will not be rejuvenated, it's economic position can suffer a huge shock in the coming decades. The proportion of trained individuals varies among the refugees: it is the highest among the Syrians, around 40%. The new residents can be securely placed with a full identity screening, tightened residence permits, citizenship and a proper integration program. The proper management of incoming workflow is also essential, which can be achieved by creating jobs and transforming the labor market. People in existential safety would not only boost the economy (taxpayers, free skilled workforce) but also improve the declining demographic tendencies. With the possible growth of already settled families or the start of new families, the population pyramid may move in a positive direction.
A part of increasing security in the EU is to start building the pillars of economy for the years ahead.
Besides protecting our borders, the long-term and constructive handling of current conditions should be considered as well.