Immigration and terrorism in Europe

5129
49%
51%
Source
Pexels.com
Since the beginning of the European migration crisis, one question has sparked tension within the public sphere: is this phenomenon linked to the spread of terrorism on the continent? Politicians, experts and civil organisations are all eager to give us answers to the emerging situation, these explanations however can often be conflicting.

Author
Végh Pál Péter
Translator
Kiss Szonja
05/12/2018 - 00:00
According to many, the rising number of migrants arriving to Europe are responsible for the Islamist terrorist acts committed in the continent's big cities in the last few years. In 2016 terrorism claimed at least 826 lives in Europe. This number is the highest since 2002.

According to many, the rising number of migrants arriving to Europe are responsible for the islamist terrorist actions committed in the continent's big cities in the last few years. In 2016 terrorism claimed at least 826 lives in Europe. This number is the highest since 2002.
According to a research conducted by PEW Research Center, around 60% of Europeans think that the rising danger of terrorism is the consequance of the influx of migrants entering Europe. According to the research, more than 70% of Eastern-Europeans and 61% of Germans see direct linkage between the rise of terrorism and the number of migrants. Do the numbers support people's opinion?

Analysing 2016 data – that is the most up-to-date at the moment – we can see that the number of asylum seekers arriving to Europe was around 5 million. In addition, the number of those who applied for asylum in European countries (meaning those whose refugee status has not yet been granted) is close to 1,5 million. In total there were 6,5 million immigrants on the continent in 2016. This number was around 2 million in 2013 and stayed the same until 2014/15, the beginning of the migration crisis. 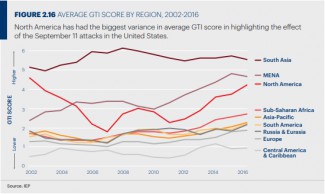 We can see on the figure that between 2010 and 2016 terrorism activities have almost doubled in Europe. With the outbreak of the migration crisis, terrorism has constantly and significantly grown. The statistics clearly show that with the growing number of refugees, terrorism and the losses caused by it have also increased in Europe. The two processes are not independent from each other at all. To make their connection obvious, we have to investigate the perpetrator groups and individuals.

Most of the migrants are from Syria and Afghanistan – these countries’ population is 90% Muslim. According to the 2016 report of Europol, Muslim terrorist activity has also significantly increased in Europe in the last few years. 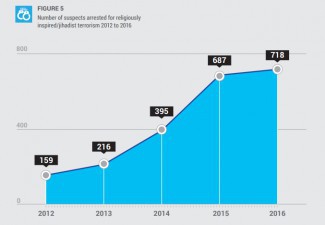 Number of terrorists arrested in Europe, inspired by their religion/jihadists

A strong increase can also be seen in post-2014 data. The corrolation is visible, the connection between migration and terrorism is directly proportional. Terrorism and the activity of muslim terrorists has risen with the outbreak of the migration crisis.
In the last few years, almost all of the significant European terror attacks were committed for a religious purpose, by jihadist perpetrators. The migration gives opportunity to Middle Eastern extremist terrorist organizations to resettle terrorist cells to Europe through the extensive human-trafficking networks.The continuous migrational pressure on the continent is the hotbed of terrorism so it will continue to pose a significant threat for the future as well.

The real victims of terrorism

Author
Tóth Dominika
Translator
Kiss Szonja
05/12/2018 - 00:00
Most of the individuals committing terrorist acts in Europe were born in Europe or are second- or third generation immigrants. Nevertheless, with the beginning of the migration crisis, in the last few years voices that claim that the rising number of terrorist attacks are linked to the migration crisis, are getting louder. Are these valid concerns or is this atmosphere only a result of the spreading of radical views? In any case, before collectively condemning others, we should ask: who are the real victims of terrorism?

Statistics show that terrorism had been around even before the big migration crisis, the number of terrorist attacks has not necessarily grown since. Immigration could have facilitated it, but terrorism is not its direct consequence. Terrorist attacks do not necessarily happen because of immigration, because their centre continues to be on the ground of the Arabic world. For that matter, terrorists were able to sneak into certain countries undetected, even without the migrants, and to execute orders anyways.

Terrorists did not arrive to Europe yesterday

Those who bring themselves to commit violence could settle inconspicuously in the cities of Europe years and decades earlier, waiting for the right time to attack. This proof is supported by the fact that the majority of the perpetrators are Western-European-born citizens or descendants of second or third generation immigrants.
It would be pointless to entrust someone who just arrived to the country and who does not even have any knowledge of the language or of the area, with the execution of a terrorist attack. These kind of attacks are usually not surprise raids but carefully premeditated actions. In most cases, terrorists even send prior threats or warnings to the destination country to incite even more fear. Terrorists aim to keep in fear the areas of the world that are not yet under their influence, thus extending their authority. Evidently, the danger of terrorism is not caused by migrants or Arabic people but by jihadism, the fanatic stream of religiousness.

Ideas reach people easily in the modern world and easily influence them, recruiting new members for different organizations. The internet certainly helps the fast and easy expansion of radical views. Terrorists had used this method long before the migration crisis. ISIS and al-Kaida are also able to corrupt more and more European youth, but then they are mostly „used” in the Iraqi, Syrian and the other Middle Eastern conflict.

We cannot condemn innocent people just because they come from areas controlled by the al-Kaida and ISIS. When we talk about refugees, we have to make a distinction between two types of people. There are innocents who arrive to Europe in hopes of a new home, a new life, but not by their own choice – they are forced to flee, in many cases, because terrorist organizations control their countries. They are the political refugees. In the other group we can find those who arrive to seek prosperity; they are the economic migrants. That is why we cannot be prejudiced. This does not however mean that we should not be precautious and prepared.
It is more and more common to connect people with Arabic origins and/or Muslim faith or even the whole Islamic religion with terrorism. By creating these stereotypes, people identify those who are religiously or ethnically attached to the Islamic world , as terrorists. This results in the increase of racism, ethnical discrimination and inequality. We judge people right away based on their skin colour and their appearance and then we exclude them. We should however be confiding and humane with others and not instantly picture an enemy solely based on their looks. It is not a coincidence then that in these cases the outcasts, who are no different to Europeans, turn to other groups that take them in and that allow them to become full members of a community again. Usually terrorist groups gladly take advantage of these outcasts, for example by providing them with a new home. This is not right and has to be stopped in one way or another.
How are terrorist attacks and the migration crisis linked? If we share the opinion that terrorism is the consequence of immigration and the descendants of previous immigrants are the ones that committed the crimes then in the future not only should we ban letting new migrants in but the situation can only be changed by deportating previously arrived and already settled immigrants. However, this is not only absurd but also quite unrealistic. Evidently, by rejecting refugees the current stance cannot be changed.

Europe’s unreadiness is the true breeding ground of terrorism

Terrorism in not the consequence of letting migrants in but of something that we allow terrorists to do to us; to keep us in terror. By being unprepared and creating panic, Europe only shows its weakness, and becomes an easier target still. A lot of people change sides exactly because of this; they do not want to battle on the losing, weak side. People feel the ever-growing, intense influence of terrorism on their everyday life, so they rather give in to the pressure.
If we take a look at the number and intensity of the last few years’ terrorist events, we can notice a decreasing tendency in the European Union. The level of threat has generally grown but I doubt that it is the result of migration. According to Europol, organized terrorist threats of ISIS and the al-Kaida are more and more alarming, but it does not say that this tendency would be somehow be linked to migration.
Nevertheless, we cannot be ignorant about this topic because our world is changing in a rapid pace. The question remains: which direction should we choose? Terror and exclusion or the real and professional resolution of problems?