2080
45%
55%
Source
Flickr
The year 2017 was marked by the national celebrations of the thirtieth anniversary of the Erasmus exchange program. While many European leaders have welcomed the existence and success of this programme, only a few of them have taken a more reserved stance towards it, to the point that this program now appears to be untouchable.

The necessary reform of the Erasmus programme

Author
Léo Quester
Translator
Kummer Livia
06/29/2018 - 00:19
At the dawn of a future renovation of the European project, in order to preserve European diversity, and not to increase divisions, the reform of the Erasmus programme appears to be necessary. It could also allow the establishment of a true European society.

The Erasmus programme was launched in 1987 with the intention to help young Europeans to study abroad for a semester at a European* university. It also facilitates the mobility of teachers, doctoral students, and apprentices in Europe. This programme is globally a quantitative success. Within the last 30 years, it has enabled more than 5 million people to acquire a mobility experience, thanks to European funds. The majority of the beneficiaries of the Erasmus programme – which was renamed Erasmus + in 2014 – are students, with about 3.3 million mobility participants since 1987. The aim of this program was to strengthen the European sentiments of the citizens of the Old Continent. To achieve this aim, the Erasmus programme was created to facilitate language learning and cultural exchange.

The anniversary year of this programme was therefore an opportunity to outline a report. It has to be said that the political leaders, from President Macron and Chancellor Merkel, through Schulz (German politician and former President of the European Parliament) to Mogherini (Italian politician and High Representative of the European Union for Foreign Affairs and Security Policy), as well as the media, students and teachers, they all were unanimous in their opinions about Erasmus +. All of them believe that, in view of the undeniable success of the latter, there is no longer need to stress the utility of the programme. Its success can be further demonstrated by the parallel launch of the Erasmus programme for apprentices in 2016. Moreover, the official figures tend to underline program´s positive results for example by pointing at the growing number of exchange students in Europe, or at the surprising survey of the European Commission indicating that 27% of the beneficiaries met their future spouse during their Erasmus stay.

Nevertheless, the future of this program is not so rosy after all. It seems that Erasmus + has gradually lost sight of the meaning of the original project. For instance, the programme should promote learning of European languages in line with the EU's language policy which is supposed to ensure the symbolic recognition of each spoken language in the Union. In fact, however, in all the countries but those where the official language is French, German or Spanish, teaching and practice of English have become hegemonic. Another illustration of this slow drift is the low level of interaction between local and Erasmus students, which some researchers (N-B: Papatsiba, 2003, Dervin, 2008d, Ballatore, 2010) call the "Erasmus ghetto".

The reality of this "Erasmus ghetto" evolves of course according to cities and contexts, but in most cases, it seems in to embrace the features of an exclusively festive sociability, completely disconnected from the local reality. In many European capitals, the Erasmus phenomenon is thus increasingly associated with businesses and consumption patterns that maintain this particular segregation, sometimes even conflicting with the local population (this is the case in Barcelona or Budapest ...). In a few years, this flagship program of the European construction has gradually become for many a synonym for acculturation from below, based on a mainly consumerist scheme.

A new Erasmus for a true European society

In order to fight against these abuses, it seems important to reaffirm the programme's mission: to build the citizens’ Europe from the bottom up while protecting interculturalism from above. This new Erasmus will then be the cement of a more united, new Europe. It will participate in the emergence of a European society, essential to safeguard the European project.

Firstly, it may be useful to further regulate the allocation of Erasmus + grants to make the process fairer and more equitable, to continue to foster local integration. If European funds have to be readily able to allow more and more students to participate in mobility by helping them to finance their housing, for example, this does not exclude all control. Considering that the overall budget allocated by the Member States to Erasmus + is not infinite, tightening of the conditions for granting European aid would then facilitate the increasing democratization of the programme.

Secondly, the acquisition of the minimum level of the language of the host country by the end of exchange is a realistic objective and it is in line with the original project. Indeed, learning English is essential since it facilitates communication and allows the teaching of courses that bring together students from all over Europe or even the whole world. However, it cannot be done to the detriment of the local language. Anyway, learning a language, even at an elementary level, remains the main asset of anyone who wishes to integrate into local life. It is also an asset for integrating the labor market. Thus, in order to remedy the disconnection between Erasmus students and local students, a problem which is linked also to the language barrier, the European institutions could require acquisition of language skills at least on the minimum level (A1 or A2) of the language of the country from each student by the end of their exchange. Moreover, in the times of Brexit, the idea of Umberto Eco that the "language of Europe" really becomes "translation" is not logical anymore. This would help restore interculturalism.

Finally, it is fundamental to rethink partnerships between universities and the organization of the program. Host universities should facilitate the interaction of their students with Erasmus students as much as possible. If this is carried out through support provided to student associations, it would also mean introducing additional modules centered on "knowledge of the country", and supplemented by meetings favored with fellow citizens who have been in the host country for a long time. For the "Erasmus", the most important thing would then be to learn more about the history, about the political and social organization, and about the cultural wealth and way of life of the host country. At some universities, such initiatives already exist. The thing to do now is to strengthen and sustain them.

Now, at the time when the European project is being contested, and the major overhaul is approaching , it is time to reform the Erasmus project in order to make European citizenship more tangible, but also to bring all parts of Europe closer to each other, promoting the emergence of a true European society.

A diverse program with demonstrable successes

Author
Lucia Polláková
07/16/2018 - 20:19
The European Union’s Erasmus exchange program has become more and more famous over the years and as time passed, it has also been increasingly criticized. While there is certainly room for improvement, the multitude of existing possibilities it entails for young Europeans, along with its spectacular achievements, is still unprecedented.

With the Erasmus programme, most European students associate 1 or 2 semesters of study abroad, enabling them to study from European Union funds or to experience an intercultural environment. However, few of them know that over the years it became so much more! First of all, the Erasmus exchanges are not only for study programs but also for internships in different countries. And the EU created also a second, but not less important sister-program of it called Erasmus +.

Erasmus + in the same spirit, provides short-term, multi-day exchanges focusing on current themes and challenge for youth and youth workers from different corners of Europe. It is amazing that Erasmus + combines elements of informal, formal and non-formal learning. In practice, this means that participants do not feel like they are attending school lessons. Subject are presented in a playful, interactive form. However, the biggest mission of this program is to strengthen the sense of European identity, inclusion and show the benefits of an intercultural environment, a goal for which the Commission has reserved 14.7 billion euros. 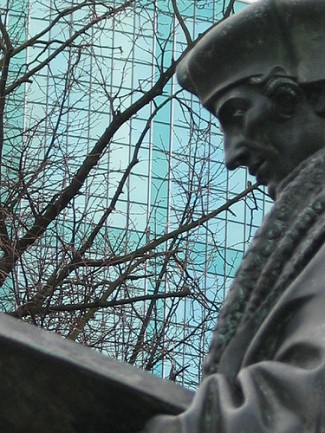 English is the key

To allow these short term, multicultural exchanges, English is used. I am of the opinion that English is a universal language for all countries of Europe and facilitates their communication. While it would be great to boost engagement at a local level by having learned the basics of the country’s language in which exchanges are organized, unfortunately, it is often not possible to manage it beyond the typical exchange interval in the form of max. 2 weeks. Erasmus + is primarily focused on growth, employment, social justice and inclusion. To reach these goals in a brief period it is impracticable to burden the youth with learning the language of the host country. English is like I mentioned a common language all over the world and I see no reason to change this. This could be however complemented a one-day host country day, where participants could also learn the basic phrases of the country's language.

Erasmus is an enormous success. During its 30 years of existence, more than 9 million people have travelled abroad. Best of all, 85% of former participants feel more European thanks to the programme and up to 94% of them feel more tolerant (https://euractiv.sk/section/all/infographic/program-erasmus-oslavuje- 30-breeding-ake-success-brought-infografika /). These are tremendous results that support the importance of Erasmus. For this reason, the European Commission has decided to increase the funding twice to € 30 billion.

Another success of the programme is the fact that students have the opportunity to experience living abroad, become more self-sufficient, independent and at the same time prepare the basis for their future working life. Networking and personal development are significant contributions to the life of each participant in the program. At the same time, participants may learn about another culture, which can contribute to the elimination of prejudices and stereotypes about other countries and nations. If the next 30 years of the Erasmus programme will just as successful, or if its conditions manage to improve, Europe can become a long-term leader in the development of human rights and democracy.